That is why we put together a selection of places one can visit during one longer walk. It will take several hours and will cover some of the most important and interesting landmarks of Krakow located on the famous Royal Route (Polish: Droga Królewska) or just in its neighbourhood.
So it is our Krakow one day itinerary.

The Route officially begins at St. Florian's Church, containing the relics of St. Florian – the Patron Saint of Poland – who miraculously saved numerous times during several invasions. This is where royal funeral processions used to start, concluding at Wawel Cathedral. 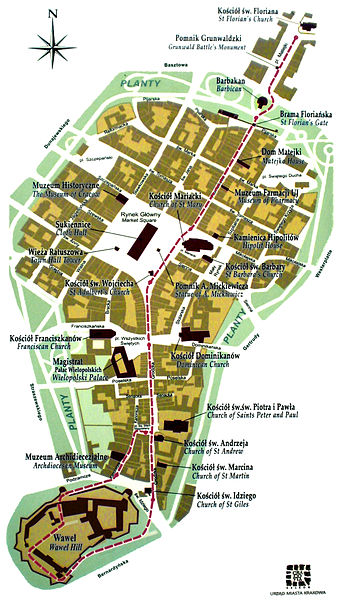 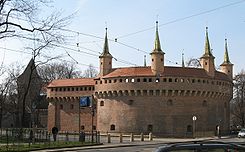 At Matejko Square (pl. Matejki) we pass the Academy of Fine Arts and the Grunwald Battle's Monument with a sculpture of King Wladyslaw Jagiello in a central place.

After crossing Basztowa Street it is worth stopping first by the Barbicane, just outside former city walls, on its northern side. The Barbicane looks still like over 500 years ago when it was constructed. This Gothic-style fortified outpost is one of only three of its kind still surviving in Europe and also, the best preserved.

Continuing our Krakow walking tour we enter the Old Town through the stone-built Floriańska Gate, placed between the last remaining parts of the city ramparts. It is the only gate of the eight gates built in the Middle Ages that was not dismantled during the Austrian reign in the 19th century.

Crossing the Gate we find ourselves on the always busy Floriańska Street, full of boutiques, restaurants, bars, shops etc. - all in old medieval buildings and their basements. It is worth deviating from the Royal Route, to paralel St. John's Street (ul. Św. Jana) where we find the Czartoryski Museum. It is one of the country's oldest museums as the initial collection was formed in 1796 in Puławy by Princess Izabela Czartoryska. The Museum officially opened in 1878.

The most renowned painting at the Museum is one of Leonardo da Vinci's best-known works, the Lady with an Ermine. Other highlights include two works by Rembrandt; several antiquities, including sculptures; Renaissance tapestries and decorative arts; and paintings by Hans Holbein the Younger, Jacob Jordaens, Luca Giordano, Pieter Brueghel the Younger, Dieric Bouts, Joos van Cleve, Lorenzo Lotto, Lucas Cranach the Younger, Lorenzo Monaco, Andrea Mantegna, Alessandro Magnasco, and the Master of the Female Half-Lengths.

There are plenty of other artifacts, some of them even ancient. You will also see a saber of British general Blaney whose British-Spanish several thousand strong force was beaten by a 300 strong Polish unit in the Battle of Fuengirola (1810). 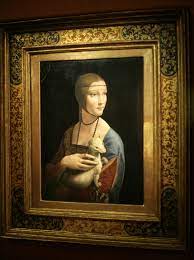 Coming back to the Royal Route we enter the Main Square (Rynek Główny). The view is breathtaking – it is the largest medieval market square in Europe. On the left-hand side, at the northeast corner of the square we see St. Mary's Basilica, home of the oldest and the largest Gothic altarpiece in the world. Little bit on the right (while standing at the end of Florianska St.), at the center of the square, stands the Renaissance cloth hall Sukiennice. 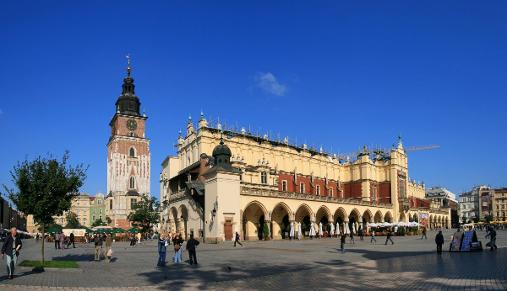 All that on the Main Square

Moving forward, behind the cloth hall we can find the Town Hall Tower (Wieża Ratuszowa), the last remaining part of a bigger hall where Krakow's councillors used to hold their meetings. Whole „Rynek” is surrounded by row houses (kamienice) and noble residences.
Between Mariacki Church and Sukiennice you will see the monument of Adam Mickiewicz, one of the most important Polish poets, writing in the era of Romanticism. It is a popular place for meetings, dates, especially as nearby flower stalls come handy.

If you want some shopping while on your Krakow walking tour you will do it in the Cloth Hall (Sukiennice).  Especially if you are interested in handicrafts and souvenirs - there are plenty of stalls along the bottom floor. Upstairs you may see another portion of paintings in the branch of National Museum (Muzeum Narodowe) - this time mostly works of biggest Polish 19-th and first part of 20th century artists.

The Royal Route passes the Romanesque St Adalbert's Church (Św. Wojciecha) in the south-eastern corner of the square, and leads down Grodzka Street again along a number of historic landmarks and two smaller squares featured on both sides.

No place for the Saints...

Some of the most important are churches - first of Saints. Peter and Paul and the other one of St Andrew. Both of great historical value. The first has been known for years as the smallest one in Krakow – „as all the Saints stand outside”. Well actually there are sculptures of the Apostles in front of the church....

The other one was constructed in XI century and still bears Romanesque style of archirecture. It was the only place in the Old Town where its residents defended themselves during Mongol invasion in the XIII century.

Grodzka ends at the foot of the Wawel Hill. Whole royal architectural complex above features Wawel Castle with an armoury, the Cathedral and many other attractions. And also spectacular views from its ramparts on Vistula River , Manggha Museum of Japanese Art and the southern part of Krakow.

Of course the castle is worth visiting on its own and it is... another several hours of sightseeing.